Sgt. Joe Toye was one of the best soldiers we had in Company E, 506th Parachute Infantry, 101st Airborne. Every man in company E would tell you that when the chips were down in combat, he would like to have Sgt. Joe Toye protecting his flank.

Dr. Stephen Ambrose in his book, Band of Brothers, states that Company E was as good a rifle company in World War Two a there was in the world. A unit is rated as “elite” only when it consistently accomplishes its assigned missions. Sgt. Joe Toye was one of the few men whom you could always count on to carry out his assigned job. That made it possible for Company E to earn the honor of being known as an “elite” company.
Let me share my personal memories of three key battles, in three different campaigns, in which Joe Toye accomplished, with distinction, his assigned job. 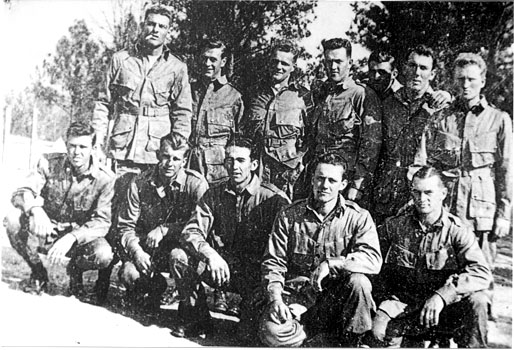 NORMANDY/D-DAY 1944
Despite a severe hand injury, suffered on his parachute drop the night before, Joe Toye was with me, Lt. Compton, Bill Guarnere, and Pvt. Lorraine as we knocked out four 105mm canon that were firing on the troops landing on Utah Beach, D-Day morning. Joe Toye wa a key member of that group, out in the van, infront of the entire invasion of Normandy; we got the job done.

HOLLAND- SEPT. 1944
After the 506th had captured Eindhoven, the Germans retreated and broke off contact with the regiment. On September 19th Company E was given the mission to push east and establish contact with the enemy.

Three and one half miles east of Eindhoven, at a town by the name of Nuenen, Company E, consisting of 130 men, together with a squadron of tanks from the British 2nd Army, ran head on into the German 107 Panzerbrigade. They immediately pinned us down in the ditches beside the road.However, we, in turn, had been able to sting them and stop them from over-running and surrounding us. My hope was that we could hold on until it got dark and then we could try to withdraw back to the regiment at Eindhoven. We had accomplished part of our mission- we had made contact with the enemy. Next, I wanted to know what unit we had contacted and how big this unit was.

Joe Toye happened to be the first man I saw when I got this idea and he got the job. “Joe, get me a LIVE prisoner!”

Joe was a squad leader, but he left the squad behind and went out in no-mans land by himself and got a LIVE prisoner. He got the job done! Joe accomplished the key part of Company E’s mission for that day. Singlehanded, he once again made Company E and “elite” company. Action like that in combat wins the respect for life of every man that was in the company.

BASTOGNE
On January 1st the German Air Corps made their last big bombing raid of the war. They smashed Bastogne, they bombed our front lines. Joe caught a peice of shrapnel in his right arm. This was is third Purple Heart. He was evacuated to Bastogne for first aid treatment.

By January 1st the 101st was no longer surrounded at Bastogne. Joe could have been evacuated to a rear eschelon hospital. Instead, Joe preferred to return to Company E. As he was walking across a snow covered field to the left of the Bn. C.P., I saw him with his right arm in a sling going back to the front line. I cut across the field to stop him. I said, “Joe, you don’t have to go back on the line with one arm. Why don’t you take it easy for a couple of days?” I’ll never forget his answer: “I want to be with my buddies.”

Two days later he was caught in a heavy artillery barrage and he lost his leg. That kept him from joining his buddies on the front line then, but that did not stop him in the next 50 years from joining his friends at their annual reunion.

Today, I know Joe has joined his assistant squad leader Cpl. Jim Campbell, who he lost in Holland and all the rest of his buddies who have preceded him – in Heaven