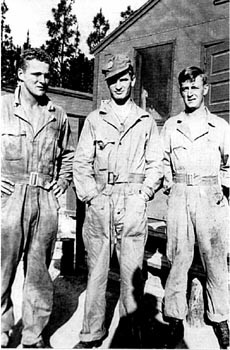 In September of 1999, one of my father?s best army buddies, Don Malarkey, contacted me and asked if my wife, Laurie, and I could possibly come to Denver to attend a reunion of the surviving Easy Company vets. Of course, we jumped at the opportunity and spent two very magical days getting to meet and visit with this amazing group of aging warriors. Most of the names in that room who were bigger than life to me as a kid (and now as an adult thanks to the book) were there, and the experience was indescribable. The aura in that room was palpable. I received an education about my dad throughout those two days that I could have never imagined.

I had always thought that, like most kids growing up, my dad was the toughest guy on the block. At that reunion, I found out at that my hunch was absolutely correct. More so, I found out that he was one of the toughest of the tough in a very tough and elite outfit. I know now that I will never meet a more physically or mentally tougher individual than was my father.

The miniseries debuted on June 6, 2001 in a special theatre built just off Utah Beach, and HBO sponsored a week long reunion for all surviving vets and their spouses and covered their tab. Laurie, my sons Cory and Nick, and I spent two days in Paris with the vets and most of the actors in the series. Unfortunately, Kirk Acevedo, who played my father, was unable to attend as he was shooting another HBO series in New York–Oz in which he stars. It was an unbelievable two days of companionship, story telling, and sight-seeing with HBO footing the bill for most activities and meals. The premier itself was top shelf in every way.

All the big shots were there (Hanks, Spielberg, the President of France, grand-son of Churchill, grand-daughter of Eisenhower, to name a few) and the festivities were first class. When the premier film ended, there were very few dry eyes in the place. Tom Hanks said to us, ‘”it’s too bad Joe isn’t here to enjoy this with us.” I have nothing but the ultimate respect for Tom Hanks and what he is doing to remember the WWII vets. From there we went out on our own and toured the battlefields where my dad fought and bled in Normandy, Holland, and, finally, Bastogne. Many of the spots had changed very little in 55 years. In fact, in Normandy and Holland we were showed around by gentlemen who were 18-year-old kids in 1944 when Easy was fighting on their farms. The farms are still operating and owned by the same families! Bastogne was very surreal for me because I believe that battle was ground-zero in my relationship with my father. All who survived that frozen hell were changed by it forever. It’s where my dad experienced frost-bitten feet and picked up his last two Purple Hearts.

A friend from Holland who has toured this site with the Easy vets showed us around Bois Jacques, the chunk of forest where Easy held the line. He showed us the foxhole that might have been my fathers and, also, the general area where he was hit by the artillery round that cost him his right leg. To my astonishment, many of the foxholes are still there as they were left 55 years ago. We even found shrapnel still laying on the ground. This spot was in the middle of nowhere and not a memorial of any kind. You just had to know where the spot was located as there was not even one sign. Needless to say, words can’t describe what it was like to be standing on such hallowed and consecrated ground. 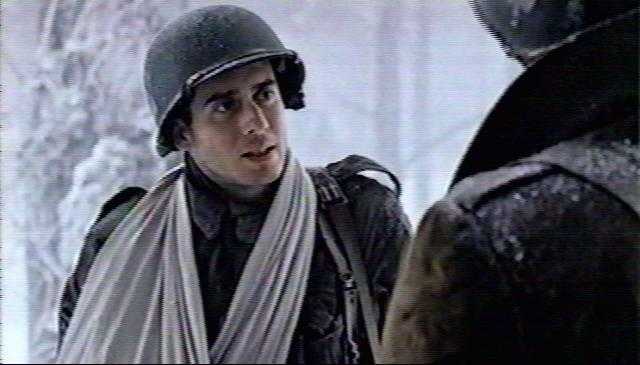 I believe that Kirk Acevedo did an excellent job of portraying my father’s intensity and toughness. One of the writers told me that their intent was to portray Joe Toye the way the vets described him “toughest of the tough'” and I think they accomplished that goal. Watching someone playing your father on screen is really quite a unique experience and was very emotional for all us. It was especially difficult watching him get so seriously wounded in episode 7.

My father spent about nine months in hospitals, finally getting discharged from the army hospital in Atlantic City, NJ. He was a coal miner, foundry, mill-type guy in his life prior to the war; but now with one leg, some of those opportunities were no longer there. But as always, he adjusted. He retired from Bethlehem Steel in Reading, PA as a drill bit grinder at Grace Mines. He died of cancer in 1995.

My family and I shall be forever indebted to both Steven Ambrose and HBO for teaching us so much about our father that we did not previously know. My father wouldn’t pat himself on the back if his life depended on it. Band of Brothers was, and continues to be, one of the seminal experiences in Toye family history and the histories of all the other families of the men of Easy. It has been the most humbling experience of my life; but most importantly, it taught me the true meaning of courage, love, and brotherhood.